How to Learn Python as a Web Designer: Features of Using the Programming Language

"
This article is part of in the series
Published: Monday 23rd January 2023 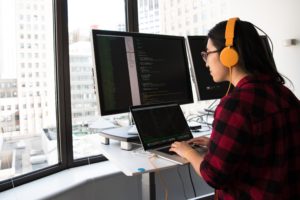 Web designers that understand backend languages such as SQL and Python are in a league of their own. Understanding the ins and outs of how the backend works make web designers linchpins that hold web development teams together.

And this is why web designers with Python skills stand out in a sea of candidates and earn higher salaries. No wonder web designers flock to web development bootcamps!

But here's the best part:

If you're prepared to further your career by learning Python, you don't necessarily need to commit to attending a bootcamp.

Here's a brief guide to learning Python as a web designer.

How to Learn Python as a Web Developer

Python is efficient and versatile, but most importantly, it's simple. If you're a web designer, besides having a knack for picking the right creative assets from sites such as Vistacreate images, you certainly have the technical prowess needed to learn Python.

To get started, you must figure out which Integrated Development Environment best suits your needs. An IDE is an application on which you will write your code, build executables, and debug your programs.

The one method to learn Python that we can recommend without any reservations is the official Python 3 tutorial on the Python documentation site.

It will teach you how to use the interpreter and then introduce you to the concepts of numbers, strings, and lists under the guise of using Python as a calculator.

Then, the official Python 3 tutorial gets into control flow tools. These are statements such as if, for, break, and continue. You will also learn to use basic functions such as the range() function.

Next, you will learn to define functions, use arguments, and work with keywords to accomplish your programming goals.

The tutorial has entire sections on concepts such as arbitrary argument lists, lambda expressions, and function annotations, among others. These will prepare you to learn slightly more complicated concepts such as data structures, modules, input and output, classes, and errors and exceptions.

In the final parts of the tutorial, you will learn about virtual environments, packages, and various components of the standard library.

Though the official tutorial is an excellent free resource you can get into right away, there are other ways to learn Python. You can consider picking up a book like Python Crash Course.

There are also several Python courses online, with the 100 Days of Code Python course being one of the top-rated ones.

Ultimately, the "best" way to learn Python depends on your propensities. If you're the type of person who needs to commit to a bootcamp, it makes sense to enroll in one. However, if self-study is not an issue for you, get a book or a course and get started.

In addition to being easy to read and write, there's a lot to Python that makes learning it worthwhile.

Anybody can access the Python standard library since Python is fully open source. Access to the library means you don't need to write code for every little operation you want to perform like you would when using other programming languages.

You will find modules that help you in everything from image manipulation to unit testing and data mining to game development.

What's awesome about Python is that a collection of thousands of components is available in the Python package index – and it grows continually.

One of the primary aspects of Python that makes it so flexible is that the language facilitates coding based on objects and data instead of logic and functions.

Besides being object-oriented, it is also procedure-oriented, which means it's also function-focused and allows components to be reused.

Python can be extended to other languages, which means you can write Python code in a C++ program. The C++ program will run without any hitches! Of course, it will also accomplish what you've instructed without limitations.

Most programming languages require you to explain what variable type you're defining before you run any code. Python is not one of these languages.

Python decides what type of variable you have declared during runtime – leaving you no need to declare data types explicitly. This is why Python is called a dynamically-typed language.

Managing memory and remembering the system architecture is out of the question in Python. This makes Python super programmer-friendly.

You will find several advanced features in Python, including but not limited to generators, which create iterators, and list comprehensions that allow you to create new lists from other iterables.