How To Start A Career As A Python Developer

"
This article is part of in the series
Published: Monday 15th August 2022 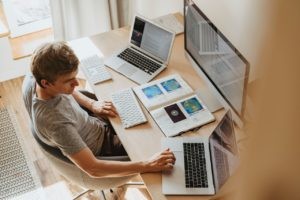 Not many people know the path to becoming a professional developer. However, software engineers and programmers are in high demand worldwide and are no longer breaking news. As a result, working as a developer will undoubtedly pay well. You don’t need to be an expert in python programming to start a career as a developer; just having a basic understanding of the language will help you land junior python remote employment in the field. You will add to your skills as you work.

Python debugging, implementation, and development are all done by python developers.

Professionals like coders, data scientists, online and mobile app developers, software engineers, etc., harness this language to create the required task. The projects and apps created are specifically catered to meet the needs of the developer’s employer. Some python programmers might even perform independent work to solve some people’s problems.

In this regard, we have teamed up with professional python developers from job aggregator Jooble to discuss the procedures to start a career as a python developer. Let’s delve into the details.

The first step to becoming a python developer is learning to code using python. There are many ways that you can choose to learn python; you can take an online python course, attend a python coding boot camp, or even be self-taught by watching videos on YouTube.

Python is popularly used and is relatively easy for people without a coding background. It is a widely recommended language for every developer to know as it is helpful in several areas of coding.

After learning to code in python, it is necessary to improve your skillset and abilities by engaging in different projects that will help you become a good developer. This will not only help enhance your proficiency and familiarity in python but also give you much-needed experience to use in the future.

You can hone your skills by working on things like building a website, building gaming apps, etc. Another way is to be a freelancer; by doing this, you will improve your skills, make money, and have credibility.

Also, almost everybody developer uses GitHub. On GitHub, you may search for other people’s repositories and contribute to their linked projects. By adding value to already completed work, this technique demonstrates that you have what it takes to be a python developer.

You must market yourself and showcase your skills after you’ve successfully learned how to code using python. You will need to have a well-written resume that will highlight your certification and skills. You should also create a portfolio of projects and tasks that showcase what you’ve done to help employers.

According to several reports, many people are interested in pursuing a career in python development due to an increase in demand for python programmers. Professional developers have also discovered that python has many features that make it stand out amongst other programming languages.

Although you don’t need any specific experience or background to become an expert python developer, there are several ways you can start a career in the profession. However, you need to understand python thoroughly to become successful.