How to Uninstall Python

Every version of Python comes with bug fixes and security patches. To ensure that you’re not affected by bugs and security issues that have been fixed, removing the old version is necessary.

While you can use more than one Python version on the same computer, installing a new version of Python before removing the old one sometimes breaks Python on the computer.

Thankfully, uninstalling Python before installing the new version fixes it, and doing it isn’t very difficult. We’ve broken down how to remove Python on every operating system in this post.

How to Uninstall Python From Windows, Mac, And Linux

How To Uninstall Python From Windows

Windows makes it easy to uninstall Python. You can remove any version of Python installed on your computer in three simple steps.

Step #1: Navigate to the Control Panel 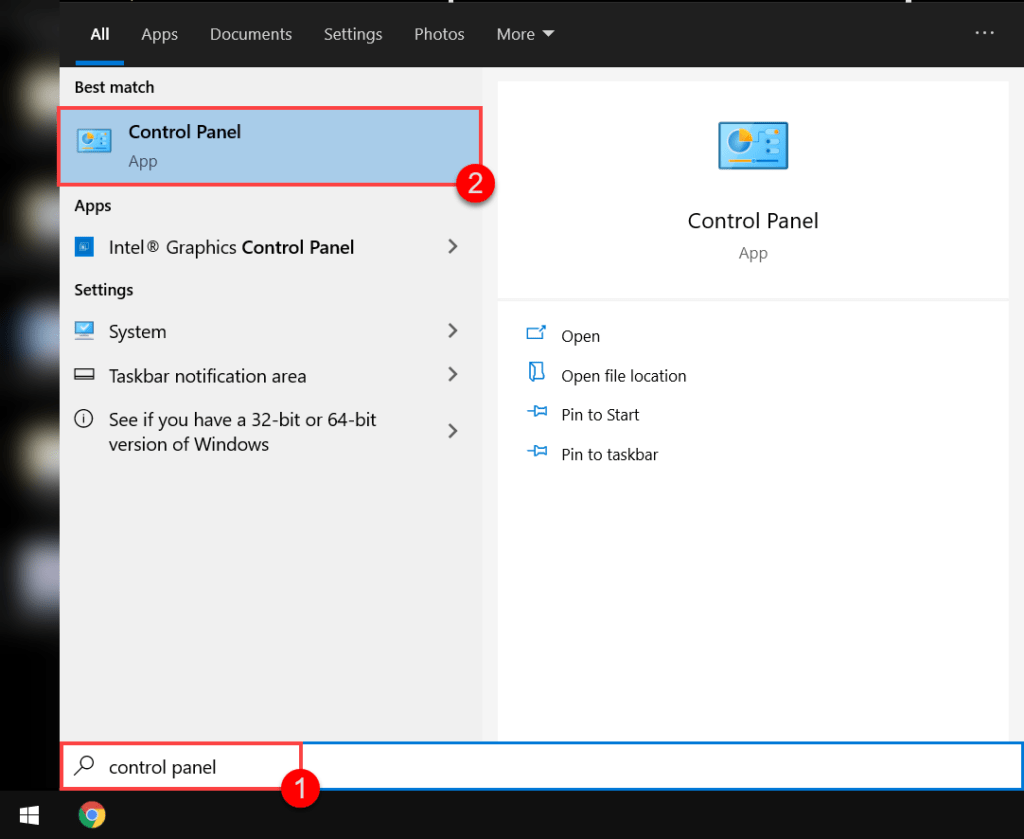 Step #2: Navigate to the Uninstall Menu

After the Control Panel opens up, you must click on the “Uninstall a program” button under the “Programs” section on the bottom left. 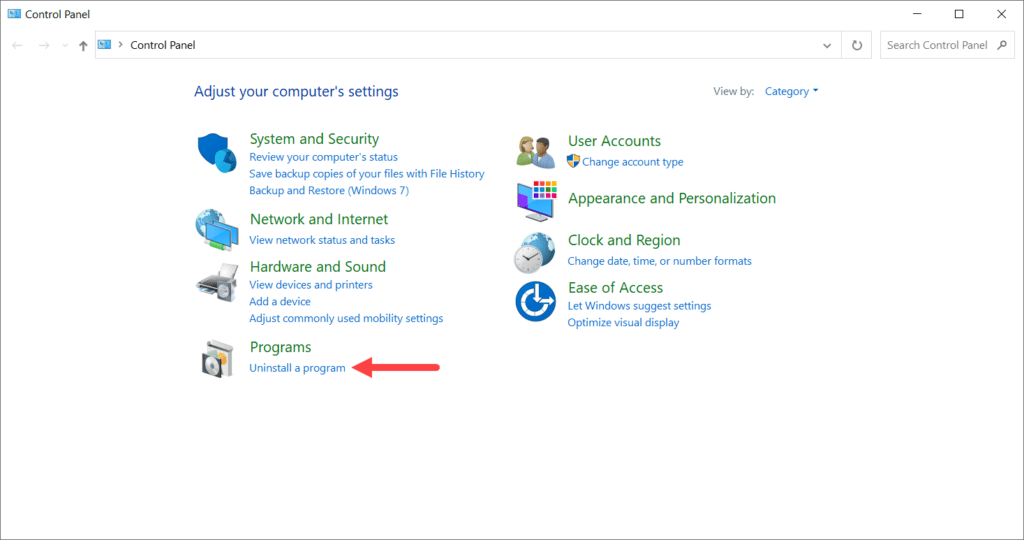 A menu with all of the programs installed on the computer will open up.

You must scroll down the list of programs and find the version(s) of Python installed on your computer. Next, select the program by left-clicking on it and click the “Uninstall” button. 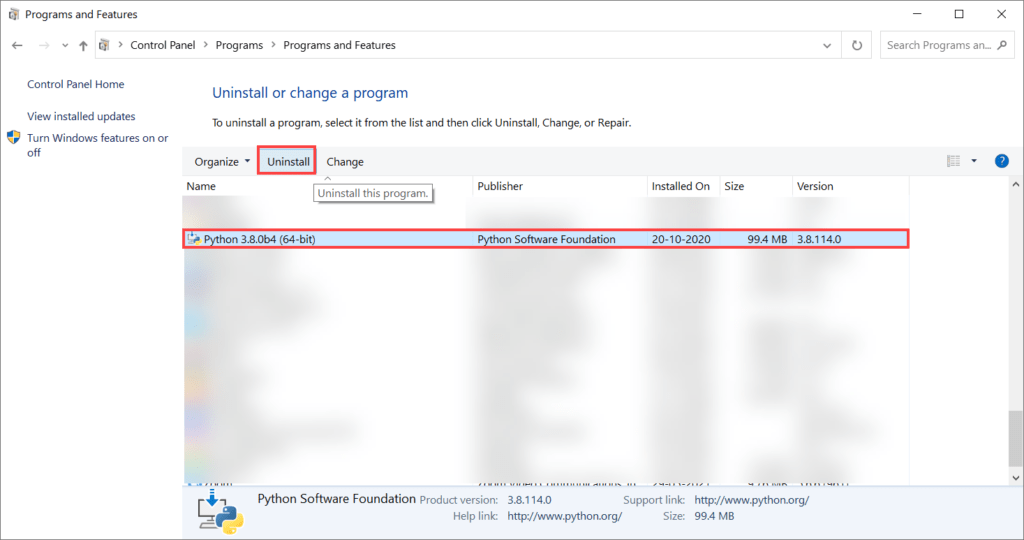 The uninstallation wizard will launch, and after you confirm your decision to uninstall Python, it will be removed from your computer.

The Python uninstaller automatically removes Python from Path when it runs. That said, it is best to check whether Python has been removed from Path. It’s easy to do and doesn’t take long:

And with that, you will have removed Python entirely from your Windows computer.

How To Uninstall Python From Mac

Uninstalling Python on a computer running macOS is not always a good idea. This is because macOS comes with Python pre-installed, and the operating system depends on Python for its inner workings.

The pre-installed Python framework appears in /System/Library/Frameworks/Python.framework. Several symlinks can be found in usr/bin/python.

Removing this version of Python will break macOS and may cause the OS to malfunction. You can read more about this at Stack Exchange’s Q&A site for programmers, Stack Overflow.

That said, if you’ve installed a third-party Python framework on your Mac, you can uninstall it safely. Here’s how you do it:

Open up Finder, and navigate to the Applications folder. Here, you will find folders of the Python version(s) you have installed. You must move them to the Trash.

If you only want to remove a specific version of Python from your Mac, make sure you only move the relevant Python folder into the Trash. 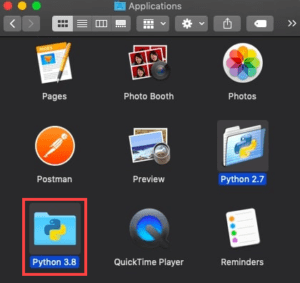 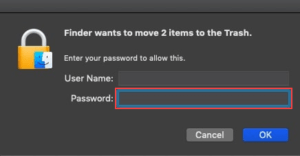 The folders will have moved to the Trash. Next, you must navigate to the Trash, highlight the Python version(s), and right-click. From the options that appear, select the “Delete Immediately” option. 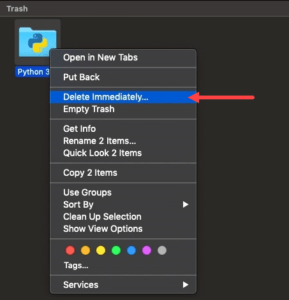 Deleting the folder will not remove Python from the computer completely. You must remove it from the Library directory and also remove the symbolic links.

You will need to use the Terminal to remove Python from the Library directory. To open Terminal, press Cmd ⌘ + Space and search for it, then launch it.

To remove the third-party frameworks from the directory, enter the following command into Terminal:

You may be asked to enter your system password. Enter it if prompted.

If you want to remove only a specific version of Python from your computer, specify the version by modifying the command like so:

Steps #1 and #2 will have removed Python directories and files from your Mac. However, links that reference Python folders that have been deleted may remain on your computer. These links are called symbolic links (or symlinks).

There are two ways to remove these links from your computer:

The links that reference Python folders are in /usr/local/bin. Since the folders that are referenced in the links no longer exist, these links will be broken.

You can see all of the broken symlinks by entering the following command in the Terminal:

If you’ve only removed a specific version of Python, make sure you replace the path in the above command with the path you used in step #2.

After you see all the broken links, use these commands to delete them:

To enter the directory:

To delete the broken links:

After you run these commands, the installed Python version will be removed from your Mac.

You can also remove the broken symlinks from your computer using Homebrew. If you don’t have it installed, run the following command to install it:

Finding broken links is much easier with Homebrew. To find them, run this command:

A list of broken symlinks will appear. You can then use the following command to remove them:

How To Uninstall Python From Linux

Linux is similar to macOS – in that Python comes pre-installed on the operating system. Further, removing the pre-installed version of the software causes the OS to malfunction.

Typically, the Graphical Display Manager fails when Python is uninstalled from Linux.

For this reason, you can only uninstall the Python versions that you installed manually.

To remove the version of Python you installed, use the following command on the Terminal:

You can remove Python 3 from Linux distros using this command:

To remove pip from the system:

If you find that the commands aren’t working, you may need to update your repo list using sudo apt get update.

And with that, you know how to uninstall Python from your computer completely.

You can now install the latest version of Python on your computer without worrying about it breaking or dealing with bugs that have already been fixed.

To ensure you install the new Python version on your computer safely, make sure you go through our Python installation guide. If this post helped or you think we can improve this answer, let us know in the comments.