How to Update Python

Python receives a major update once every 12 months, with bug-fix updates and security patches being released every few months.

The most recent version of Python – Python 3.9 – introduces features like Union Operators in dict, the Flexible function, and Type Hinting Generics.

Updating Python can be confusing regardless of which OS you’re running.

Do you remove the old version first? Or can you update the package directly?

Here’s an easy tutorial on how to update Python.

How to Update Python in Linux, Mac, or Windows

It is possible to install two major versions of Python – say, Python 2.x and Python 3.x – on one computer and use both. If you want to move from Python 2.x to 3.x, you don’t have to uninstall the previous version unless you don’t want to use it anymore.

In other words, you won’t need to change the PATH variable every time you want to use another version of Python.

But the launcher only comes installed on the Windows version of Python 3. Updating Python in computers with Linux or macOS can be more complicated.

Before you run any commands, you can save yourself a lot of effort by checking whether the Linux installation comes with the latest version of Python installed.

To check what version of Python 3 your machine has, open the Terminal by pressing Ctrl+Alt +T, and type in the following command:

If you see that your machine doesn’t have Python 3.9, you must run the following commands:

These commands will install the Python packages required to install the newest Python version. You can now install the latest version of Python in two ways: using Apt and using the source code.

Using Apt to update Python is faster and easier. Here’s how you do it:

Using the Apt package manager is the easiest method of installing Python 3.9 on Linux.

First, you must configure the deadsnakes PPA to your machine by running the following command:

You can now update the apt cache and install the Python 3.9 package:

The Python update will install. However, by default, Python will point to the previously installed version of Python 3.

After installation completes, you must update Python 3 to point to Python 3.9. Enter this command to configure Python 3:

A list of options will appear, and you will be prompted to pick which version of Python you want Python 3 to point to. The prompt should look like this:

All you have to do is type the right selection number, and you will have updated Python to the newest version on your Linux machine.

To verify the version of Python being used, you can run:

Updating Python on a machine with macOS is a lot easier than updating it on a Linux machine.

A Mac can have more than one version of Python installed. Therefore, you can update Python by visiting https://www.python.org/downloads/mac-osx/, downloading the installer, and running it.

If you have Homebrew installed on your Mac, you can run the following command on the Terminal:

After the process completes, your computer will have the latest version of Python 3. You can verify this by running the command:

If you want to upgrade pip and add a new library to it, you can enter the following command:

Updating to a new Python version is easy on a computer running Windows. All you have to do is visit the Python downloads page and download the latest version.

If you’re updating to a new patch of Python (3.x.a to 3.x.b), when you run the installer, it will prompt you to “Upgrade Now.” The installer will look like this: 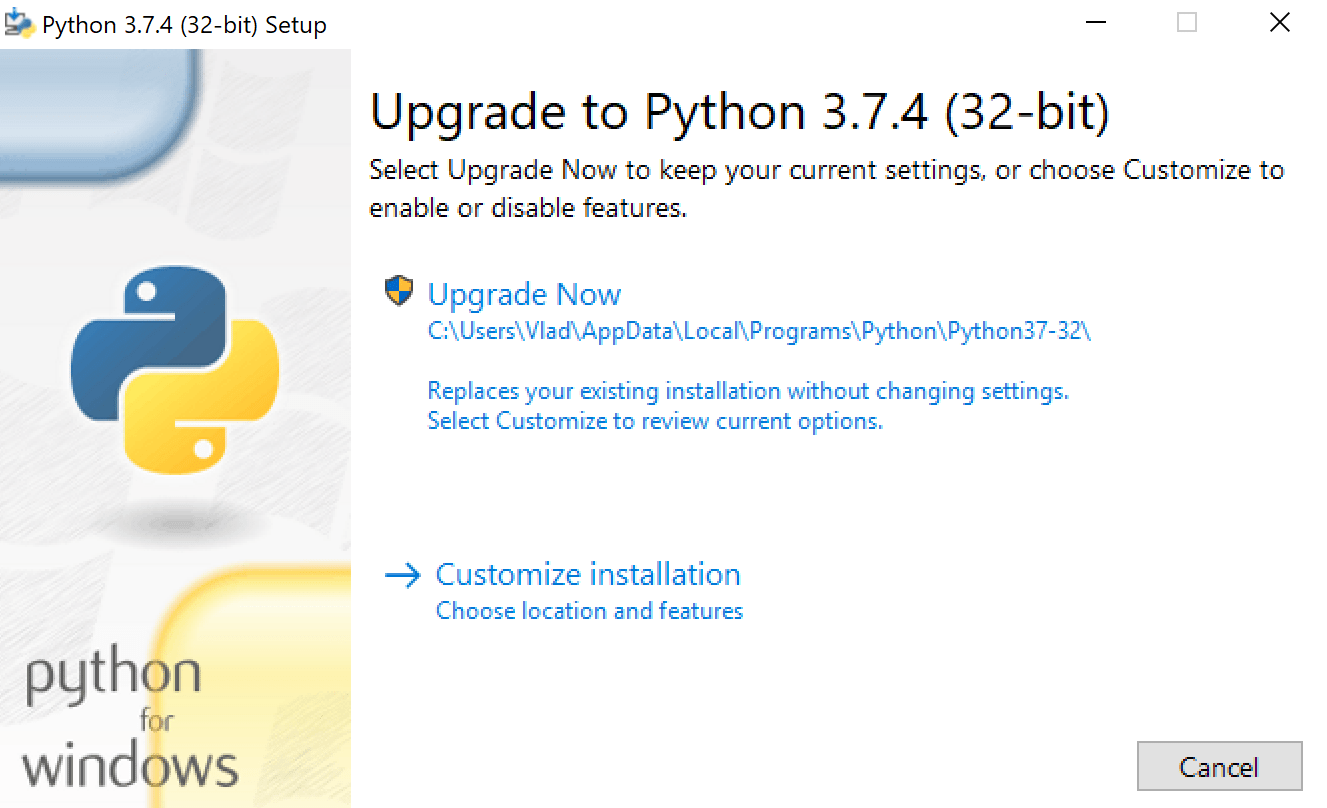 Clicking on the button will replace the existing version of Python with the new version. The older version will be removed from your computer. After you restart the computer, the new patch will be installed on your machine.

In contrast, if you’re updating Python to a new minor version (3.x to 3.y), you will see the “Install Now” prompt instead of the “Upgrade Now” prompt on the installer. Clicking the button will install the new version of Python. However, the old version will not be removed.

Running a program with a specific version is as simple as using the “py” command and entering the version you want to use, like so:

Suppose there are many projects on your machine that use the previous version of Python, and you use them all in a virtual environment. In that case, you can update Python just in that environment using the following command:

Furthermore, updated versions also come with bug fixes and improved security measures. With this guide handy, you should be able to get your hands on the newest Python version in a matter of minutes.

Going through our Python usage guide next will help you quickly pick up all that you can do with Python.