How to create a mobile application with Python: 3 examples from the industry

"
This article is part of in the series
Published: Tuesday 18th October 2022 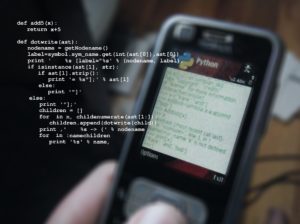 Ways to Create a Mobile Application With Python

The sale of smartphones is growing at lightning speed, and manufacturing companies are investing unheard-of sums in mobile technologies, their development, and popularization on the market. Mobile development is a rapidly growing field of programming, as the number of mobile devices far exceeds personal computers, and this trend will only continue to grow.

Many developers present their products delighting users with a range of possibilities open after installing one or another software. However, it is worth taking the time to consider various aspects, among which are encryption, cross site tracking, and doing a diversity of tasks.

Specifics of Developing Apps in Python

There are two ways of technical development and implementation of projects for mobile devices, including websites and applications. At first, both methods look very similar. But in reality, each of them offers its advantages and disadvantages. Unlike websites running through browsers, native apps need to be downloaded from specific portals like Google Play Market, App Store, and others.

The products are developed separately for each operating system, require installation, and provide faster access to content. Among the diversity of possible offers are a language application, messenger, vocabulary, or flower and plant identifier that will become a solution in certain situations. Using Lily plant identification will help you learn the name of flowers and various flora treasures by providing information on how to care for them. Everyone will find something valuable.

Convenience. It takes the highest position in the list of advantages of choosing a mobile application instead of a web resource. Analysis shows that apps are more popular than cross site tracking because of convenient conditions. They provide better user interaction, load content faster, and are easier to use. In addition, they have push notifications and a design flexibly compatible with different screen sizes.

Personalization. A mobile app will be the best solution for services that require regular use. They allow users to create personal accounts and keep necessary information close at hand.

A Plethora of Highlights of the Language

Python is one of the most well-known general-purpose interpreted programming languages. This system includes strict dynamic typing and automatic memory management. It supports many programming paradigms, including the following:

More and more developers are choosing Python mobile space, as it is efficient and has many advantages that characterize working with this language.

Simplicity. You can use this language in web development and other areas where specialists do not have deep knowledge. The essence of development in Python syntax is similar to ordinary mathematical operations, which do not carry any particular difficulties.

Diversity of implementations. The most famous and canonical is CPython, the C implementation. It means that the code written in it interacts fully with C, using libraries of this language for implementation. There are a lot of such examples, up to interaction with Android and iOS.

Wide use. Even Disney representatives resort to using this language. The consequence of this fact is that much about him is already known. As soon as you encounter a problem while programming in Python, you can immediately seek help online. Perhaps someone has already suggested a solution for each of us.

No need to compile. Python is an interpreted language. The latter means you can run the program immediately after making changes to its file. It leads to various statements. One of the latter is completion, processing, and debugging of programs are much faster than in many other languages.

The dedicated language is open-source and freely distributed. You can download it for free and use it in your application. It is also possible to read and modify the source code. Any code is error-prone. The development in Python throws exceptions that can be handled, hence avoiding program crashes. Automatic memory management includes a private heap containing all objects and data structures. The memory manager allocates space for objects and other internal buffers.

Since it is a very accessible language, we have a plethora of libraries to make any activity easier. Many existing Python libraries will help you focus on more interesting things than reinventing the wheel. It is also the best wrapper language for working with more efficient implementations of C/C++ and CUDA/cuDNN algorithms, so existing machine learning and deep learning libraries work effectively in the Python mobile space. It is also significant for work in machine learning and artificial intelligence.

The development in highlighted language has tools for almost every aspect of scientific computing. It can be useful to process financial data. What is more, Facebook uses the Pandas Python library for data analysis.

Python and Pygame are the best languages ​​and frameworks for quickly prototyping games or for any beginner who wants to make simple games. Several military first-person shooter simulation video games use this language for add-ons and features.

The era of high technology has given each of us many opportunities to work in a particular field. Mobile application development in Python is a treasure trove of diverse products that provide the best experience for millions of users surfing websites. It is significant to consider the various advantages and features of programming in the chosen language.

A detailed review will tell you new things, allowing you to find the most suitable sphere for you. The latter is the result of the scale of influence, which provides many features for creating any software.

The development in Python does not stand still, continuing to delight us with many discoveries, and continuing to offer developers features for creation and honing skills.