"
This article is part of in the series
Published: Sunday 23rd January 2022 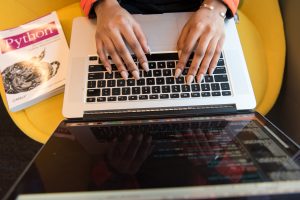 No matter how many programming languages are in use now, and which of them is the leader of today, Python remains one of the favorites. The majority of software developers choose it when considering the second programming language to add to the resume (and professional prospects that Python opens). The reason is simple – Python is really popular and convenient.

Created in the previous century (1991) by Guido Van Rossum, the Python coding language had a purpose to make coding easier. Once it was the alternative to Perl only, but it has evolved to become the general-purpose language with excellent code readability. It allows the developers to achieve more by doing fewer steps and is simpler than C++ and Java.

Python uses keywords from English, and it does not even demand in-depth programming knowledge – knowing Math will be enough at the start. The simplicity, open-source nature, the wide variety of libraries, and impressive scope made it the most popular programming language in the world by now.

The Python features which conditioned its popularity

You can download Python from the official website for free. Its source code is available to the users, and you can work with it and improve it. A huge Python community supports this language and enhances its features of programming to make it even handier.

As already mentioned, this language includes rich libraries of ready modules and functions, tested and polished. Working with Python, you can refer to those libraries whenever needed and save time by taking the ready modules. There is no need to write your code from scratch, as you can use the library elements.

Object-oriented programming (OOP) is one of the most essential features of Python. It suggests binding the data and functions to become a single unit and work together. The rest of the code won’t access the data. In brief, this approach simplifies the system performing the processes, protocols, etc. Python supports all the OOP concepts and lets the programmers use this language at full capacity when creating new products.

When coding in Python, developers won't need to remember the architecture of the system separately. Memory management is not necessary either. Python takes care of it.

The Python code can be written into C and C++ languages. Besides, you can integrate Python with other programming languages successfully.

This programming language is compatible with all platforms. The same code runs correctly on Windows, Linux, and Mac. You won't need to implement any specific changes in the code to adjust it to the particular platform. Go on working on your project on any device.

When you execute the Python code, it works line by line, one at a time. Thus, you can debug the code easily. Besides, the syntax is logical, and the code always includes fewer lines than any other language would offer.

After you've developed the logic for the code block, you can clone that logic and apply it to other modules, bigger or smaller. It is possible to apply all characteristics or only selected options.

https://jatapp.com/services/application-development/. It is suitable for websites, desktop and mobile applications, games, and other products. Also, it is the default choice for the automation, Data Science, AI, and Machine Learning areas.

The primary benefits of Python programming

Of course, all these industry leaders chose this language for a reason – or many reasons. With the support of such outstanding market players, Python can flourish.

We have already defined the characteristic features of this coding language. Now, let us review which practical benefits they bring into work, programming routines, and specific challenges.

It should be mentioned here that Python is not the fastest coding language in the area. It is quick enough. However, it is inferior to Java and C. Still, using this language allows the programmers to improve their productivity significantly. The explanation is straightforward.

With its brevity, Python takes less time to code the products. Access to ready modules and functions will let the programmers save time and eliminate possible mistakes. At the same time, the overall functionality of Python allows for the speedy performance of the applications created with it.

The best choice for prototypes

As many startups involve dedicated applications, the choice of the programming language is essential. Their full-functional prototypes must be ready quickly. Startups are rarely unique. Getting on the market earlier than competitors can determine the fate of the product.

Under such circumstances, Python becomes the most beneficial option. It offers excellent process control and can create complex, cross-platform apps fast. Besides, it provides its own unit testing. If you are a company creating an application for a startup, Python will be on the top of your language lists.

The most suitable option for competitive programming

The competitive programming stage is a part of the job application where the candidates should demonstrate their practical coding skills. The speed is often the deciding factor in this process. It may define whether an applicant proceeds to the interview stage. In this case, Python competitive programming can be the best variant even if you usually specialize in a different language.

The functionality of Python makes it applicable for resolving any tasks. The concise syntax and less code needed to do the job ensure outstanding speed. You will always compete for the assignment faster if you have to write five code lines instead of twenty-five. By the way, Python experts are in high demand on the market, and you can expect attractive job offers.

The possibility to use Graphical User Interfaces (GUI) often defines the user-friendliness of a programming language. Writing code in a visual format is always more convenient. It also lets the programmer control the correctness of the code better. Python offers several handy GUIs that developers can import and apply.

The code writing and formatting standards

PEP is the fundamental standard for Python code writing. It ensures that the code always remains readable. If you transfer a project to another developer, there won’t be any problems with exploring the code in Python. The syntax remains clear and concise, with no unnecessary elements and expressions.

Working procedures will only benefit from this, and it is one of the biggest reasons for Python's popularity. Also, it contributes to better self-organization of the programmers. Python encourages them to write clear and accurate code from start. It even happens that programmers experience issues switching from this language to other coding languages. They search for the same clarity and brevity, but no other programming language has them on the same level.

A lot of teaching materials

If you decide to implement Python in your company, there won’t be any difficulties. There are lots of books, textbooks, and articles, both in English and other languages.

Besides the text materials, plenty of video guidelines is available on YouTube for free. You will find personal developers' vlogs, records from webinars and conferences, and other sources of information. Add the fantastic community involving Python specialists from all over the world. In fact, it is much simpler to learn Python now than several years ago.

Though Python might not be pure perfection – it has its drawbacks too – all experts find that the benefits of Python programming are much weightier. Besides, this language is current and continually improving. There is no doubt that issues will be fixed or compensated in the future.

Modern software development companies work with many languages, but Python will surely be among them. The functionality, versatility, and brevity are the evident benefits of Python that any programmer praises. It has already outperformed even such dominants as Java and C.

So, if you are considering the programming language to start from or learn as the second one, choose Python, and it will never fail you.